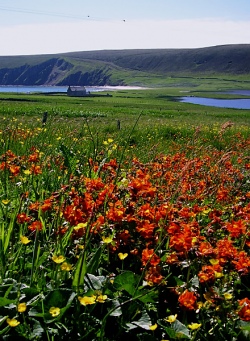 Zoom imageTresta Fetlar is the fourth largest of the 100 Shetland Islands, which lie at the "crossroads of the North Sea", equidistant between Scotland, Norway and the Faroe Islands.

Fetlar lies South of Unst and to the East of Yell, and together the three islands make up the "North Isles" of Shetland. See Fetlar's location.

Fetlar is known as the "Garden of Shetland" due to it being by far the greenest of all the islands. Indeed, the name Fetlar is reputed to originate from the Viking term "Fat Land", further strengthening the island's claim to be a fertile area suitable for crops. The island also is home to a diverse range of flora, fauna and wildlife, and around two thirds of the island is designated in some form, whether as a Site of Special Scientific Interest (SSSi), a Special Area of Conservation (SAC) or as an RSPB Bird Reserve. Learn more about Fetlar's nature and wildlife.

At present around 60 people live on the island, increased from a low point of 48 in early 2009.

Within Shetland, Fetlar lies to the South of Unst and to the East of Yell, its two larger neighbouring islands. Together they make up the three "North Isles" of Shetland.

Fetlar is renowned amongst ornithologists and naturalists the world over. It Britain�s premier site for the beautiful red-necked phalarope, and is famous for hosting the first and only breeding pair of snowy owls in the UK.

Fetlar has been inhabited since prehistoric times, and there is evidence of settlements from a range of periods at various points on the island.

What's on in Fetlar

The largest concentration of houses in Fetlar is at Houbie, where most of the services are found. The other two are at Funzie on the East side of the island and at Tresta, which lies west of Houbie near the islands main, award-winning beach.

Fetlar's residents are concerned by ever-rising energy costs and the effects of global warming. With this in mind, organisations in Fetlar have already begun to take steps to to reduce their use of imported energy, and also to reduce their energy bills.

Fetlar has a number of community organisations, and there are many opportunities for people on the island to volunteer

The Fetlar community was extensively consulted during 2008 on their views as to a way forward for the island. From these consultations, a Community Development Plan was put together

Read more
Getting To Fetlar