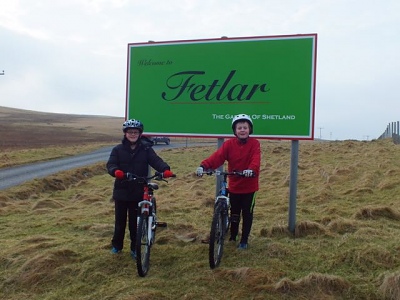 Zoom imageJoshua and Keiran at the official start line ready to go ! 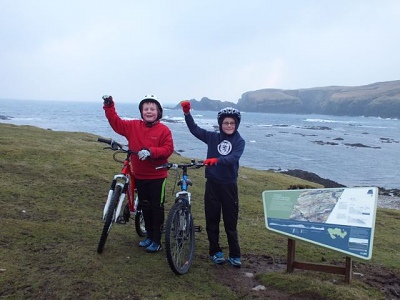 Zoom imageThe boys at Funzie after completing their 7.5 mile ride

Two North Isles pupils decided to do something for charity last Saturday (14th February), by completing a sponsored bike ride across Fetlar. The two ten year olds, Joshua Painter, from Fetlar Primary and his friend Kieran Brown from Baltasound Junior High School in Unst, rode the 7.5 miles from the ferry terminal at Hamars Ness to the Banks of Funzie. They decided to cycle to raise money for the charity WaterAid, which provides clean, fresh drinking water to communities that are reliant on dirty water. They also provide access to drainage and sewage.

Fetlar Primary has been studying Water and its uses around the world as part of its work towards a Rights Respecting School Award (Level 1). The 5 pupils have been learning the difference between needs and wants and have decided that access to clean water is a need, along with clean air, nutritious food and the right to an education. All pupils raised money by baking for a school event, but it was Joshua himself who felt empowered enough to raise some more money through a sponsored cycle. His original target was £100, but that figure has already been passed with the total at the moment looking likely to be over £250. This means that the two boys have raised over £33 per mile each between them.

The boys would like to thank everyone who showed their support in any way whether through donating or turning out to cheer them on. Special thanks to Kieran for coming into Fetlar and cycling all the way.