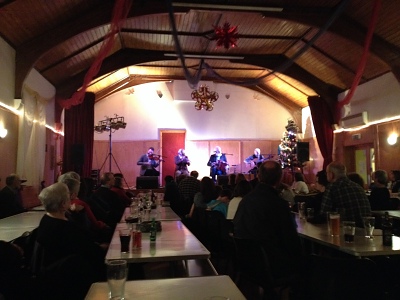 Haltadans were first on and gave a very polished performance, featuring a number of the tracks for their new EP. They were followed by Megan & Lauren, winners of this years Shetlands got Talent, they did not disappoint and their close harmonies were much appreciated by a receptive audience.

Then came the main attraction; The Boys of the Lough. They excelled themselves with a wonderfull performance. Fine vocals and exceptional musicianship blended with a good measure of humour delighted the audience. Many had last seen the "Boys" live in Cullivoe in 1981 and Im sure are all are wishing its not anywhere near that long until they can get to hear them again.

Well done to you all, Davy would have been proud.