Pete's thank you to supporters 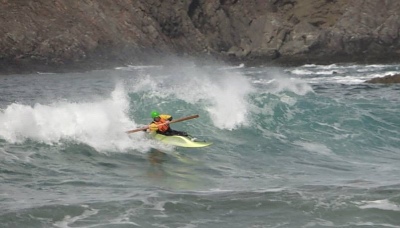 Zoom imagePete in action at a trials event Pete Sawford recently qualified for the Surf Kayak World Championships to be held in Spain from 29th June until 5th July. He has also been selected as a member of the Scotland at the event. Pete has had to travel out of Shetland on numerous occasions to compete in qualifying events in order to qualify and gain selection for the Scottish team.

Pete recently held a fundraier to help with the significant costs of attending the competition and has a thank you message for all his supporters.

"I would like to thank to all the people who helped make Saturday's pie night and fund raiser such a big success .It was heart warming to see a big turnout with approximately 40 folk sitting down to eat. I'm setting off from Fetlar on Friday and getting the ferry Saturday to drive 850 miles to Portsmouth then 26 hours to Santander then 400miles to Valdavino just north of Ferrol in Galicia (poor peerie car). Arriving late on the 24th will give me 4 days to get in trim for the competition. I will be competing in 2 events as an individual and will represent Scotland in one team event and will be on the subs bench for 2 other team events.I will keep in touch with the results as I go along .Thanks again. Pete"

We will be following Pete's progress and hope to publish some updates from Pete during and after the event.